A whole century in red and white

Football club Vojvodina is in many ways unique and recognizable in Serbian football. In addition to the rich tradition that dates back before the First World War, the Youth Academy that has produced a large number of former and current aces of world football, trophies and results that it has achieved on the domestic and international scene, football fans in Serbia recognize Vojvodina by its original, a half red – half white jersey, in which the Old Lady’s players have been playing for 100 years. However, it is less known in the sports public when and why Voša performs in such jerseys.

When it played their first game, in May 1914 in Kovilj against the local club Šajkaš, Vojvodina performed in white shorts and light blue jerseys, which were sewn by the mother of Milorad Milićev, one of the players at the time. Unfortunately, it was the first and only game that Vojvodina played before the outbreak of the largest conflict in the history of mankind until then, and it came to life again only in 1919, when the story of the red and white jerseys began.

Namely, in 1919, there were many Novi Sad residents studying in Prague, and some of them, when they returned home, took with them balls and jerseys that they received as a gift from the Slavia Football Club. It was the first real football equipment to arrive in Novi Sad. From that moment, the players of Vojvodina started playing in half white, half red jerseys, just like Slavia from Prague.

However, only three years later, on this very day (July 23, 1922), at the session of the Assembly of the club, as a sign of gratitude to FC Slavija, it was decided that the red and white jerseys be accepted as the official jerseys of FK Vojvodina. In that way, Vojvodina became the first club in Serbia to officially accept the red and white colors as their own. On the same day, the club received its official coat of arms, which was slightly changed in relation to the coat of arms of FC Slavia. More precisely, the only difference was that the star on the coat of arms of Vojvodina was not red, as on Slavia’s, but blue, so that, with a red-and-white background, the coat of arms would be in the colors of the Serbian flag. 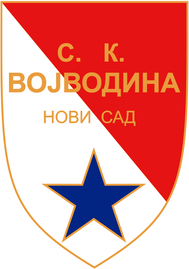 Since then, the jerseys and coat of arms have been changed many times, but red and white have been and remain a trademark of the Old Lady of Serbian football.