Skip to content
Home/News/Lalatović: We have to be beasts on the pitch

Lalatović: We have to be beasts on the pitch

In the third round of qualifications for the Europa League, Vojvodina will play against Standard in Liège on Thursday. At FC Vujadin Boškov in Veternik, all members of the FK Vojvodina expedition who will travel to Belgium this morning did the necessary testing for the corona virus, and before that, the general manager of the club Dušan Bajatović addressed the coach Nenad Lalatovic and the players, in presence of the President Dragoljub Samardžić and Member of the Management Board Ljubomir Apro.

He wished the players a successful performance in Liège and told them that they just need to believe in themselves, and stressed that the club will do everything to make the trip to Belgium at the highest level, but also that the players will be adequately rewarded in case they reach the playoffs of Europa League. 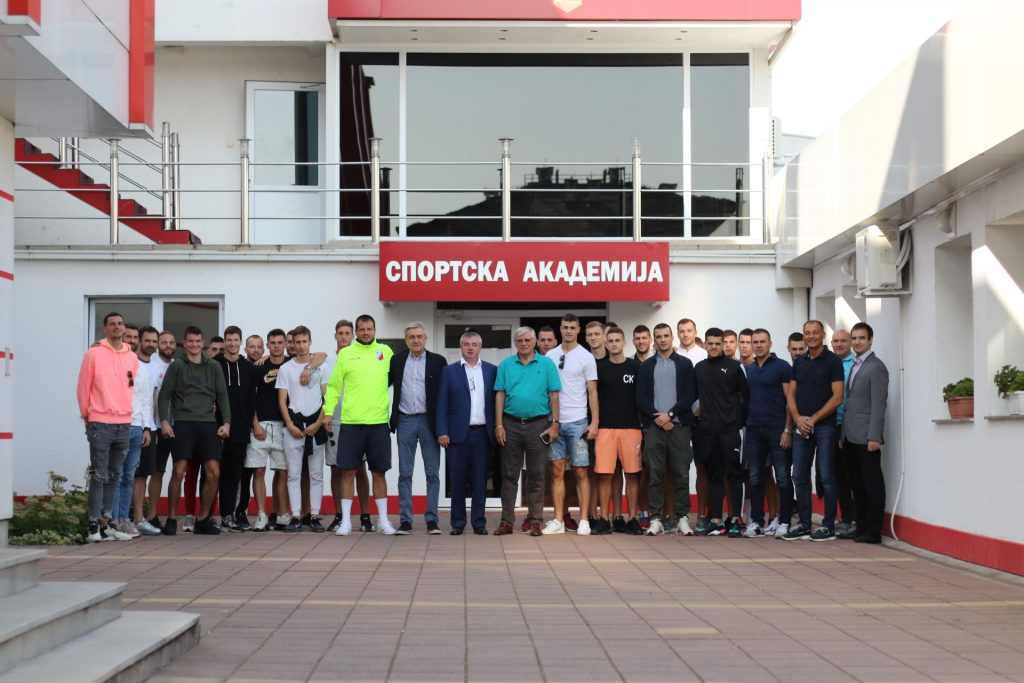 A little later, a press conference was held in the ceremonial hall of FC Vujadin Boškov ahead of the match against Standard, and the Manager Nenad Lalatovic first used the opportunity to invite fans to buy T-shirts made especially for this match and thus help ten-month-old Lana Jovanović in humanitarian action, which you can learn more about here.

– I think that 1,000 dinars for a T-shirt is not a big price, especially if we know that we are helping someone with that. On this occasion, I invite all our fans to buy a T-shirt and help little Lana recover as soon as possible, which our club and I sincerely wish her, and I am sure that our fans, as well as every Serb, think so. If we can, we should help the girls who are so sick. It is a humane gesture and all the praise for FK Vojvodina, and I hope that our fans will also deserve praise, and that they will buy T-shirts in as many numbers as possible. By the way, the T-shirt is beautiful, cotton – says Lalatović.

He then stated his expectations from the match against Standard in Liège.

– I am glad that we reached the third round, but I would rather wish we played from the first. I had European matches both as a player and as a coach, but some of our players have never played in Europe. These are specific matches with very good opponents, against which you cannot play in the Super League. No need to waste words on Standard. They have been Belgian champions 10 times and have many national team players. They have their quality, they play at home and are currently second on the table. They recently won on the side. They rested some players because of us, since they obviously took us seriously, which I am glad about – says Lalatović.

He sincerely believes that the red and whites can beat the renowned team from Liège.

– You can see how much they want to enter the group stage of the Europa League, and I told my players that they have nothing to lose, and that anything is possible in football. Standard is the absolute favorite, but it was also Astana against Budućnost, but Budućnost won away. Standard is no bigger club than Vojvodina, which has its own tradition and which should not be afraid of anyone. Of course, according to the budget, they are ahead of us, but games like this are not played by money. Our players must show that they have a greater desire than the Standard players. If they want to secure their existence, they have to show that they deserve it in a match like this. We are not only going there to play, but we are also preparing to beat Standard in our heads and in training. It will be difficult, but we have to think that way – Lalatović points out.

A good atmosphere within the team could be a big advantage of Voša against Standard.

– The atmosphere among the players is good and I am satisfied with how they work, and I am also satisfied that we played very well against Radnik, with 17 shots on goal. It was the same against Javor, but sometimes when you play well, you can lose. I will not be able to count on goalkeeper Simić and Topić, who are injured, but I can and will count on the strongest possible team. They have few Belgians, which only shows that they can pay a lot. I expect a good and quality game, but also a brave performance of my guys, so that we come back here as heroes, just like when we won the Cup and when everyone was proud of the players of Vojvodina. It would be phenomenal to play in the group stage of the Europa League for the first time, and I would be overjoyed for Vojvodina to be the first club in my coaching career with which I will participate in such a competition – Lalatović notes.

The Manager of Vojvodina is very well acquainted with the qualities of the Belgian team.

– I expect the greatest pressure on our back line. They play absolutely attacking football. The wingers play like two midfielders and go inside on the counter foot, the defenders play as wings, and the defensive midfielder goes down and they play with three players in defense. We made a good analysis and they will not be able to surprise me, but individually they are very good and they can solve the game with one move. They are motorically great, fast and technically well-skilled. In the last match, they had 90 percent of correct passes – says Lalatović.

The match in Liège will be played without the presence of spectators.

– That may be more suitable for the visiting players. As a player, I once played for the national team of the world in Romania in front of 100,000 people at the farewell of George Hadzi. Our deceased Manager Radomir Antić was also there, as well as Fatih Terim. However, in competitive matches, as a player, I almost never paid attention to the atmosphere. I was always focused on what the coach told me and to fulfill my task in the game. The player must be focused, and during my career I was able to blame my players several times. Players on the pitch must be beasts, hungry for success – Lalatović notes.

He points out that players do not need special motivation for this match.

– The problem is to motivate a player against smaller clubs, and against such a large one, they do not need my motivation. I just need to tell them what I tactically expect from them. That match changes their lives, as well as their families. My greatest success is when I can help my father and brother, that is, give my children what they ask of me. It is the success of every man and they have that success. Win and you will change the life not only of yourself, but also of your family. That is my message for them – says Lalatović.

The team of Vojvodina will leave FC Vujadin Boškov tomorrow at 7:15 am towards the Nikola Tesla airport, from where they will travel to

– The problem is to motivate a player against smaller clubs, and against such a large one, they do not need my motivation. I just need to tell them what I tactically expect from them. That match changes their lives, as well as their families. My greatest success is when I can help my father and brother, that is, give my children what they ask of me. It is the success of every man and they have that success. Win and you will change the life not only of yourself, but also of your family. That is my message for them – says Lalatović.

The team of Vojvodina will leave FC “Vujadin Boskov” tomorrow at 7:15 am towards the “Nikola Tesla” airport, from where they will travel to Liège by charter flight. The match against Standard will be played on Thursday at 8 pm, with a live broadcast on channel 2 of the Serbian Radio-Television, and you can watch the complete course of today’s conference in the following window: