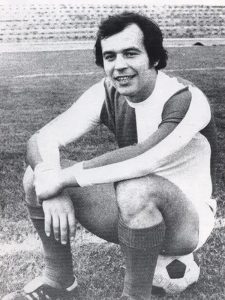 Petar Nikezic (1950 – 2014) was the best player of the generation of Vojvodina that won the Central European Cup in 1977, and he was also remembered as the best performer of free kicks the club ever had.

He was born on April 3, 1950 in Zmajevo, from where he and his family moved to Novi Sad and lived in Dimitrija Tucovića Street, right next to the stadium Karadjordje. At the age of 11, he joined the younger categories of Vojvodina, and already with 17, on insisting of Ilija Pantelic, he was included in the first team and became the youngest player and later on the youngest captain in the history of the club. He played for the senior team of red and whites from 1967 to 1978 and from 1979 to 1980, during which he played 289 championship games and scored 100 goals, which in both categories ranked him second on club’s eternal list.

Beside Vojvodina, he played for Tulsa (USA), Linz (Austria), Osijek and Šibenik, and after finishing his career, he worked for years as a trainer in the youth academy of Vojvodina.

Among fans of Vojvodina, as well as among all fans of football, he was remembered for his extremely strong and devastating shot, which gave him the nickname “Pera bomber”. About how he was so successful as a free kicker, Petar Nikezic once said:

“I naturally had a strong shot, but I think that I perfected it with Bebula Milosevic. After each training, I had to stay at least an hour and a half, and at that time, I would took at least 200 free kicks from various positions. Bebula had drawn out squares with numbers on the net, and my shooting training consisted in taking the ball and hitting the square that Bebula determined when I was in full sprint” were the words of the legendary footballer who died in Novi Sad on July 19, 2014.

Undoubtedly, Petar Nikezic was a true legend of FK Vojvodina, the true “hero of the street”, the idol of the fans, respected and appreciated by the rivals just as much as by all objective football fans in whole former Yugoslavia.