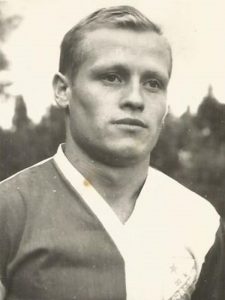 He was born on the eighth of November, 1940 in Djurdjevo, in a Ruthenian family with nine children, who quickly left without both parents. When he was only five years old, his family moved to Novi Sad, where he finished elementary school and learned a tailor’s craft, and later graduated from the Higher Economic School.

He joined the Junior team of Vojvodina while he was in elementary school, and his talent was observed by coaches Milivoj Drakulić and Franjo Hirman, who quickly set him up as the captain of his generation, which he remained until the entry into the first team in 1958. For the senior team of Vojvodina, he played 182 championship games and scored 62 goals, which put him at the fourth place in the eternal list of club’s goal-scorers. With 13 goals scored in the 1965/66 season, he was the top scorer of the team which won the championship title, and next season he scored four goals in the Cup of European Champions. Especially remembered remained the two goals which he scored in the third match against Atletico in Madrid. Right after that match, Takac continued his career in France, and from the money earned by his transfer, the administration of Vojvodina set up two floodlights at the stadium Karadjordje, which were then symbolically called “Takac’s eyes”.

After leaving Vojvodina, he had a very successful international career, having played for Rennes and Standard from Liège, with which he won two championship titles in Belgium. In the 1971/72 season, with five goals scored, he placed first in the list of goal-scorers in the European Cup that year. After retiring from playing football, he devoted himself to the coaching work, with the greatest trace left in Sochaux and Nice, with which he managed to win the French Cup. For the national team of Yugoslavia he played 15 games and scored two goals, and was part of the team that won the gold medal at the Olympics in Rome in 1960.

Today, Silvester Takač lives with his family in France, but he uses every visit to Novi Sad to visit his club as well.