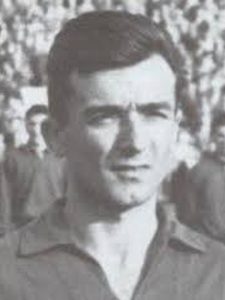 Todor “Toza” Veselinović (22 October 1930 – 17 May 2017) was a Serbian footballer and coach. He was one of the most renowned goalscorers in Yugoslavian national team history.

At international level, he won 37 caps and scored 28 goals. He played in the 1954 FIFA World Cup and 1958 FIFA World Cup, scoring three goals in the latter tournament. He played for several clubs in his homeland and abroad. He established himself as one of the best strikers in former Yugoslavia. He was the Yugoslav First League top scorer on four occasions.

He later began a coaching career and managed several clubs, including Independiente Santa Fe in Colombia, Olympiacos in Greece, and Fenerbahçe in Turkey. He won two Turkish league titles (1985 and 1989) with Fenerbahçe.

He also managed Yugoslavia at the finals of Euro 84 in France, where they lost all three of their games. Veselinović’s time as Yugoslav manager was characterized by continuous tinkering and changing of his team selection. In two seasons at the helm, he used almost 60 players.