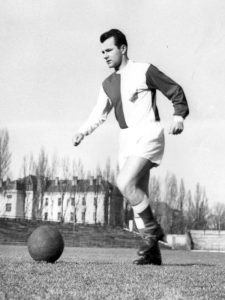 Throughout his career as a football manager, he stood out both for his many successes, as well as due to his unique sense of humour and memorable ironic comments, which were used to dissolve tension during post-match interviews; these led him to become a popular figure with football fans during his time in Italy.

Boškov was born in the village of Begeč, 10 km from Novi Sad, Vojvodina, Serbia. He comes from a Serbian family who lived in Novi Sad (he was officially born in Petrovaradin) before moving to Begeč during the Second War where his grandfather lived. His elder brother was also a football player but died early. Vujadin had two sisters Vera and Dada, the latter still living. He remained loyal to his local team and played with FK Vojvodina for most of his career (1946–1960), as well as continuously supporting it. In gratitude the FK Vojvodina training facility in Veternik is named after him. He joined the Yugoslav team that won against the Soviet Union at the Helsinki Olympics in 1952. He is still remembered in a photo with the Dinamo Zagreb team in “Charlie’s” café in Zagreb, as a great Yugoslav football player. In 1961 he moved to Italy to play for Serie A club Sampdoria for one season (1961–62), before accepting a stint as a player-coach at Swiss side Young Boys (1962–1964). Boškov then returned to the club that made him as a player – FK Vojvodina – and spent seven seasons (1964–1971) as a technical director, leading the club to winning one Yugoslav league championship in 1965–66. Vujadin Boskov was well known in Italy as a gentleman and a cosmopolitan all his life. Corriere dello sport published his quotations e.g. “Quando l’arbitro fischia… it is a penalty”. There is a book of his quotations published in Italy. He spoke several languages and lived all over Europe.

He also became a playing member of the Yugoslavia national team, and was part of the team that won the silver medal at the 1952 Olympic football tournament. Also he played at the 1954 and 1958 FIFA World Cups.

Arguably his greatest achievement as a coach came in 1991, when he steered Sampdoria to the Serie A scudetto. The following season, he led the club to the European Cup final, where they lost 1–0 to Barcelona at Wembley.

He also coached Yugoslavia at Euro 2000, where they famously lost 4–3 to Spain in Brugge and later went out to hosts the Netherlands in the quarter-finals, after losing 6–1 to the Dutch.