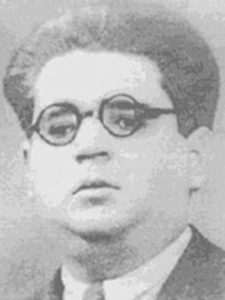 Kosta Hadzi (1898-1971) was one of the founders and later the first trainer, technical director and president of FK Vojvodina.

He was born on the eighth of November, 1898 in Vrsac, from father Kosta Hadži the elder and mother of Sofia, as one of ten children. He finished elementary school in his native Vršac, where he finished high school in Szeged and Novi Sad, where he graduated in 1916. As a Serbian patriot, he was the secretary of the Serbian army in Pecs and the deputy of the Grand National Assembly, who in 1918 elected Novi Sad to join the Kingdom of Serbia.

He left the army in 1919 and dedicated himself to gaining an academic title, and from 1919 to 1922, studied in Paris and Cannes. From there, in 1927, he returned to Novi Sad, where he passed the lawyer exam in the same year, and then until 1961 he successfully dealt with the law and advocacy.

As a 16-year-old, together with his schoolmates he participated in the founding of FK Vojvodina and practically the same moment he was appointed technical director of the club, which he performed until 1933, while in some periods of that time he performed in parallel functions: from 1924 to 1926 he was the first trainer in the history of Vojvodina, and from 1927 to 1935 he was also the president of the club.

Players and Board members of Vojvodina in 1930

He played an exceptional role in Yugoslav football before the World War II, and as General Secretary of the Yugoslav Football Federation (JNS) he was most deserving of calming passion following the transfer of the Federation’s central office from Zagreb to Belgrade. He also influenced the establishment of subsets in the territory of Vojvodina (one based in Novi Sad and the other with headquarters in Veliki Beckerek, or today’s Zrenjanin), thus protecting the Vojvodina clubs from arbitrary leaders in Belgrade. Kosta Hadzi was the leader of the Yugoslav national team in Montevideo (Uruguay), where the first World Cup in 1930 was held.

Boško Simonović, Mihajlo Andrejević, Milutin Ivković i dr Kosta Hadži on a ship during a trip to Montevideo in 1930

In addition to being a lawyer and a football worker, he was very active in cultural institutions, and from 1933 to 1939 he was a member of the Board of Directors of Matica Srpska, then a long-time president of the Supervisory Board of the Society for Serbian National Theater and a member of the Patron of the Great Serbian Orthodox Gymnasium (today’s Gymnasium “Jovan Jovanovic Zmaj”), and at the same time he also launched the “Rad” newspaper.

As a great patriot, during the World War II he provided assistance to Serbian detainees in the Hungarian camp “Šarvar”, which gave him the nickname “Šarvar’s father” after the war. With the help of his friend Bishop Irinej Ćirić, in Novi Sad he organized the help for about 3,000 children and about 800 adults, who sought rescue from fascists in households and improvised hospitals.

He was very attached to the Serbian Orthodox Church and on several occasions he assisted the Diocese of Bačka, and after the World War II, he became the secretary of the Survey Commission for the determination of crimes committed by the occupiers and their supporters in Vojvodina. Also, as their legal representative, he also fought for Vojvodina couriers who, due to the decision of the communist authorities, for the forcible purchase and confiscation, had failed and lost their property. For this reason, the regime accused him for being a helper of “national enemies,” for which he ended up in prison, but his reputation in the people was never crippled. From spending the rest of his life in prison, Kosta Hadži was rescued by the President of the Presidium of the National Assembly of Yugoslavia Ivan Ribar.

Kosta Hadži may have best been described by the advocate’s historian Milorad Boltić:

“A national revolutionary (in youth), an athlete and a sports worker (for the rest of his life), a cultural worker (when circumstances required), a political champion (opposition), a social worker (during the war) and a reputation of law firms (after the war) .“

He never left his Vojvodina, and he came to see his club in 1966 for the first time in history to become the champion of Yugoslavia. He died on October 6, 1971, and was buried at Almaško Cemetery in Novi Sad, and since 2014, in his honor, in front of the stadium “Karadjordje” is his monument.