Vojvodina Football Club, commonly known as Vojvodina Novi Sad or simply Vojvodina and familiarly as Voša, is a Serbian professional football club based in Novi Sad, Vojvodina, the second largest city in Serbia, and one of the most popular clubs in the country. The club is the major part of the Vojvodina multi-sport club society and currently the second oldest football club in the Serbian Superliga and the most successful football club in Serbia next to the rivals Red Star Belgrade and Partizan Belgrade.

On 6th of March in 1914, in Sava Šijakov’s weaving mill in the Temerinska Street 12, a group of students of the Serbian Orthodox high school, with the help of intellectuals and craftsman, established a football club in Novi Sad. The club was founded in secrecy, because the former Austro-Hungarian authorities banned larger organized gatherings of juveniles in the Vojvodina region, which was inhabited mostly by Serbs. The club took the name Vojvodina, in order to emphasize the memory of the political-territorial unit of the Serbs in the “Serbian Vojvodina” in which the Serbs, at least on paper, got the same rights as all other citizens in the Habsburg Empire, for which they have fought for years. The name Vojvodina means in Serbian a type of duchy, more specifically, a voivodeship. It derives from the word “vojvoda”, and means “one who leads warriors” or “war leader”.

Some of the friends and founders of Vojvodina in 1914

Among the club founders on that day were the future textile industrialist Milenko Šijakov, the future university professor Vladimir Milićević, the future chemist Milenko Hinić, the future lawyers Radenko Rakić, Kamenko Ćirić, Gojko Tošić, Đorđe Živanov and Branko Gospođinački, the future doctor of law Kosta Hadži and others. The new club played its first match in the village of Kovilj against local club FK Šajkaš. Vojvodina played in bright blue colours and white shorts and won by 5–0. Svetozar Jocković, Jovan Ljubojević, Milorad Milićević, Dušan Kovačev, Jovan Jocković, Ozren Stojanović, Sava Ignjačev, Predrag Gavanski, Predrag Stojanović Ciga, Živojin Đeremov and Uroš Čakovac entered the record books as the first players in the history of Vojvodina. The players were mainly pupils and students, who came from Prague in the summer holidays and played only that one match, because shortly after that World War I broke out. The strict hand of the Austro-Hungarian authorities stopped all Serbian organizations in Novi Sad and for the first time, Vojvodina was in a situation to be shut down. 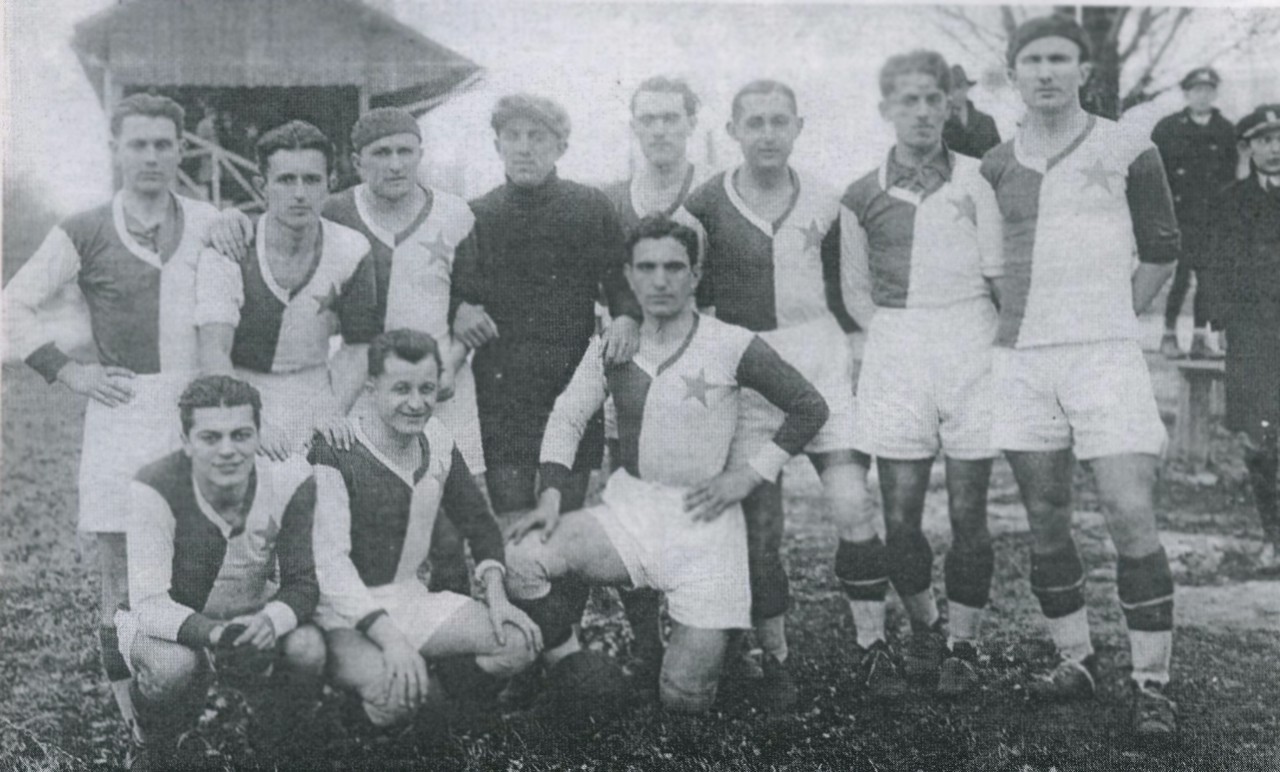 After the liberation, Vojvodina resumed the work thanks to the enthusiasm of Serbian students from Prague. The first secretary of Vojvodina became Milenko Šijakov, son of weaving mill owner Sava Šijakov, and the first president became dr Živko Bajazet, the longtime president of the Serbian merchant bank and member of the Soko organization. The club financed solely by membership fees and by generous contributions as by Daka Popović, the Novaković brothers, Ilija Balabušić and the members of Dunđerski family. Part of the Vojvodina players and management who studied in Prague were also members of football club Slavia Prague. The Czech club supported the Vojvodina members during the difficult times before and during World War I and contributed in the development of the club. In 1920, from Prague was brought the first set of red and white jerseys. At the club meeting held on 23 July 1922, it was decided that, in honour of Slavia Prague, the red and white colors adorn the jerseys of Vojvodina. The coat of arms was also partially modeled after Slavia Prague’s coat of arms, where the red star of the Czech team was replaced with the blue star, so that Vojvodina’s coat of arms had all the colors of the Serbian flag. The first coach, technical director and chief organizer of Vojvodina was the lawyer dr Kosta Hadži, one of the main founders of Vojvodina and the Novi Sad Football Subassociation. Under his leadership, Vojvodina won the Novi Sad Subassociation league in 1926, which was the first trophy in its history. Vojvodina played with following players: Mihajlović, Živić, Kričkov, Popović, Vajs, Aleksić, Grgarov, Marjanović, Šević, Petrović, Dudás and Saraz. The club provided the first professional contracts to its players, and also brought professional players from abroad such as Czech Josef Čapek and Hungarians Sándor Dudás and Abraham Saraz. One of the best and most influential Vojvodina players at that time was Dušan Marković, an effective striker who played for Vojvodina from 1921 to 1935. At the end of the 1930s, Vojvodina brought many good players into the team, which was later known as the Millionaires team and one of the best was Jožef Velker, who became to a crucial player of the club. In 1932, 1934, 1935 and 1937–1940, Vojvodina won the Novi Sad Football Subassociation league. Since then, Vojvodina begun having serious pretensions to gain promotion to the Yugoslav First League. The club failed to immediately make an impact, but during the season 1940/41, Vojvodina fought for the top. The final stage of the championship was interrupted by the beginning of World War II, and the Axis bombing, mobilization and country’s occupation made the continuation of the competition impossible. 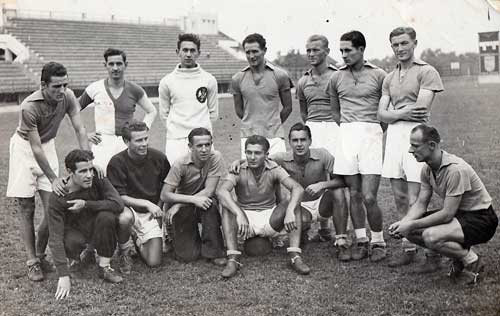 In 1962, Vojvodina was runners-up. However, the results deteriorated in the following seasons and Vojvodina even started fighting against relegation. In 1964, everything changed with Vujadin Boškov as the technical director and Branko Stanković as coach. Vujadin Boškov remodeled and modernized the club. The infrastructure was improved and a new sports center was built. It also organized a successful scouting network and the administration, headed by president Arsa Kovačević, was able to provide all necessary conditions for the competition. Coach Branko Stanković changed the style of play and shifted the emphasis on discipline and running. The only player who had a free hand was Silvester Takač, one of the best players of this generation. In 1966, Vojvodina won the Yugoslav first league for the first time with eight points ahead of second placed Dinamo Zagreb. Members of this generation were Silvester Takač, Ilija Pantelić, Žarko Nikolić, Ivica Brzić, Rajko Aleksić, Đorđe Pavlić, Dobrivoje Trivić, Stevan Sekereš, Đorđe Milić, Stevan Nešticki etc. 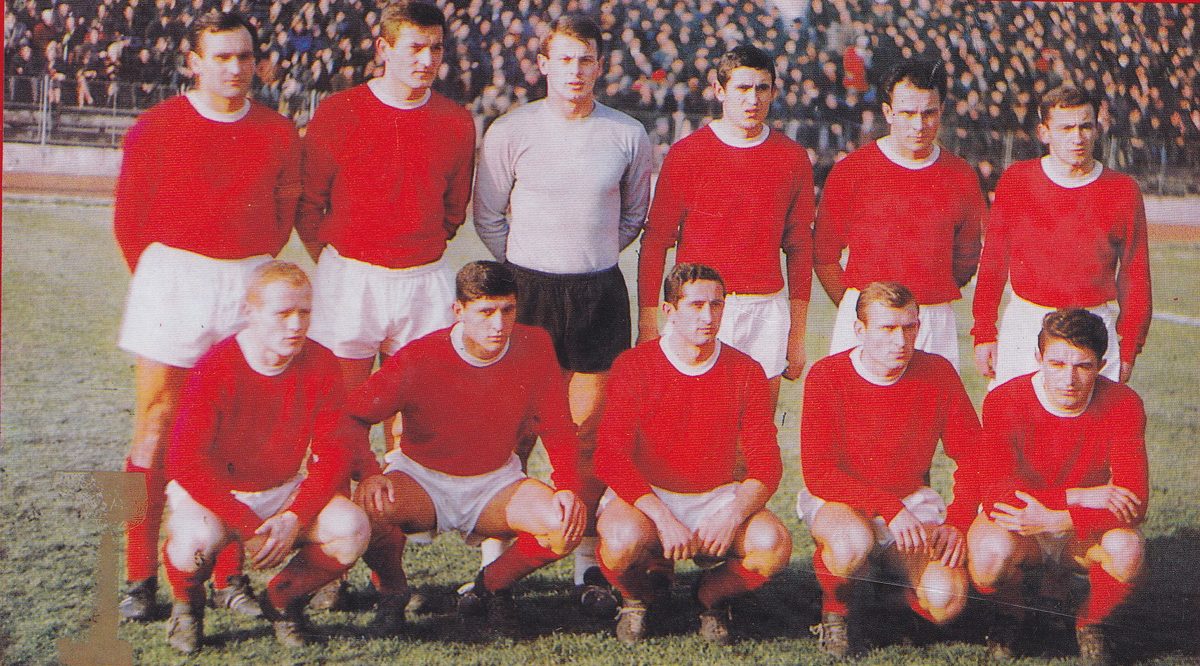 In 1989, under the new coach Ljupko Petrović, Vojvodina spent almost the whole championship as league leaders. During the season, Vojvodina won at home against all top four Yugoslav clubs. Partizan Belgrade was defeated by 3–2, Dinamo Zagreb by 4–1, Hajduk Split by 2–0 and finally Red Star by 3–1 in front of more than 27,000 spectators. Vojvodina played the decisive game for the championship against Sloboda Tuzla and needed a win to clinch the title ahead of rival Red Star. Vojvodina won in front of 27,000 spectators by goals from Šestić (twice), Vorkapić and Vujačić with 4–2. The final whistle sparked off a huge celebration inside the stadium as well as a massive celebratory pitch invasion. The second championship trophy was finally won with three points ahead, after 23 years of waiting, by the new generation of players, such as Siniša Mihajlović, Miloš Šestić, Slaviša Jokanović, Budimir Vujačić, Ljubomir Vorkapić, Miroslav Tanjga, Goran Kartalija, Dušan Mijić, Svetozar Šapurić, Čedo Maras, Stevan Milovac, Dragan Punišić, Zoran Mijucić and others. The following season, Vojvodina fell unhappily in the first round of European Cup against Honvéd Budapest, although most of the key players from the previous league-winning season remained. Losing the first leg by 1–0 at Honvéd was extremely disappointing. During the second leg, things went much better as Vojvodina got up 2–0 by goals from Siniša Mihajlović and Miroslav Tanjga, however a late own goal by defender Dragan Gaćeša dashed Vojvodina hopes of progressing further.

In 1990, Vojvodina failed to defend the previously acquired title and finished the season as 11th. The disintegration of Yugoslavia, the civil war (1991–1995), the inflation and the UN sanctions have hit the Yugoslav football teams hard. The difficult situation forced Vojvodina to sell its best players and the champions team broke up in the early nineties. However, Vojvodina’s management, led by Milutin Popivoda, succeeded to assemble a new team. The coaches, mainly Milorad Kosanović, made also a great combination of players from Vojvodina’s excellent youth, like Jovo Bosančić, Goran Šaula, Radoslav Samardžić, Goran Ćurko and Srđan Bajčetić, and players from other areas like Aleksandar Kocić, Dejan Govedarica, Goran Jezdimirović, Miodrag Pantelić, Vesko Mihajlović and Zoltan Sabo. From 1992, Vojvodina in the championship won the 3rd place 6 times in a row, and received the call of the eternal third. In 1995, it finished the first half of the season on the first place. Because of the UN sanctions, in this period Vojvodina, as all the rest of the clubs from FR Yugoslavia, was not allowed to compete in European competitions and the question on how this generation would have played on the international scene was left. However, in 1995, Vojvodina played a friendly match in Amsterdam against Ajax, in the season when they won the UEFA Champions League, but the Old lady of Serbian football defeated them by 3–2. In 1997, Vojvodina achieved also the cup final, but lost against Red Star. In 1998, Vojvodina started one after another victory in UEFA Intertoto Cup. After eliminating Stabæk (2–0, 2–2), Örebro SK (3–0, 1–0) and Baltika Kaliningrad (3–0, 1–0) in the first three rounds, Vojvodina played the semi final against SC Bastia. In the first leg, held in Bastia, Vojvodina suffered a 2–0 defeat. Although it was not given any chances in the return leg in Novi Sad, Vojvodina pulled off a convincing 4–0 win. The cup final was played against Werder Bremen. The first match in Bremen was lost by 1–0 and the return game ended with 1–1. Vojvodina coach was Tomislav Manojlović and the red-white jersey was worn by players like Nikola Lazetić, Zdravko Drinčić, Vidak Bratić, Jovan Tanasijević, Vladimir Mudrinić, Zoran Janković, Dragan Žilić, Mićo Vranješ, Saša Cilinšek, Vladimir Matijašević and Leo Lerinc.

In the 2000/01 season, Vojvodina fought unexpectedly for competitive survival in the elite and the club ran into financial problems. The departure of the club director Svetozar Šapurić opened the descent and Vojvodina entered in a several years long crisis. In a short period of time, numerous managers and coaches were changed regularly and the situation deteriorated more and more. This was a period of mediocre results and the circle of selling the best players to richer European clubs after just a couple of seasons of first-team football and replacing them with fresh young talents. Despite that, at that period, a large number of class players worn the jersey of Vojvodina like Miloš Krasić, Milan Jovanović, Milan Stepanov, Ranko Despotović, Vlada Avramov, Bojan Neziri, Vidak Bratić, Jovan Tanasijević, Radoslav Batak, Milan Vještica, Milan Belić and Miodrag Stošić. In 2005, as a final act of desperation, the organised supporters, the Firm and Vojvodina’s oldest supporters, called the “Stara Garda” (English: Old Guard), gathered and took over the assembly of the club to make the public aware on their dissatisfaction and the bad situation in the club. In the same year, the newly arrived club president Ratko Butorović announced a better future for the club. The squad was improved and in fact followed the stabilization and the rise of the club, both financial and in terms of results. Also, the management announced large reconstructions of the stadium and training facility, which were realized in the following years.

Radomir Krstić is Vojvodinas’s record-holder by number of appearances (613 matches). The goal-scoring record-holder is striker Todor Veselinović, with 586 goals (of it 130 goals in the Yugoslav championship). He was also the top scorer of the Yugoslav league in 1956, 1957, 1958 and 1961. In addition, Vojvodina had two more top scorers in its history. In 1993, Vesko Mihajlović with 22 goals and in 2010, Dragan Mrdja also with 22 goals. The first player of Vojvodina, who wore the representative jersey of Yugoslavia was Abraham Saraz Eugen in 1922, where he scored two goals in the match against Czechoslovakia. Since then, numerous Vojvodina football players were in the Yugoslav national team and Todor Veselinović, Vujadin Boškov, Zdravko Rajkov, Dobrosav Krstić, Silvester Takač, Žarko Nikolić, Dobrivoje Trivić and Siniša Mihajlović (a former player of Inter Milan) are among them.