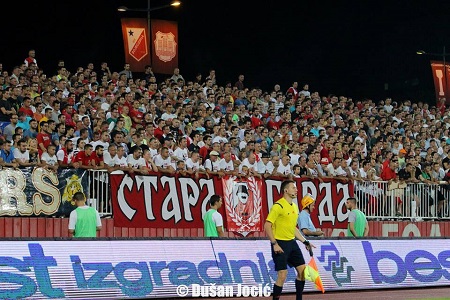 The Old guard fan club was formed on a summer day in Novi Sad in 1994, when a group of Vojvodina’s older fans decided to form their own organized fan group.

Despite the problems that occured the very same day, when the supporters of Vojvodina at Novi Sad’s beach Štrand collected voluntary contributions to finance the creation of the first flag of the Old Guard (there are stories that the flag was originaly supposed to be 20 meters long, but it had to be cut in half of this measure because the fans drank 10 meters of it), the group has been established and exists for more than two decades.

Old Guard is giving their support to Vojvodine from the middle of the eastern stand of the stadium “Karadjordje”, and its trademarks are the clock on the Petrovaradin fortress and a beer mug. The group consists of about 60 members, from workers to intellectuals.

The leader of the group is legendary Miloš Zemljanac, called Fale, a man who once removed a healthy tooth (he had to leave the job with a reason) to attend one match of Vojvodina.